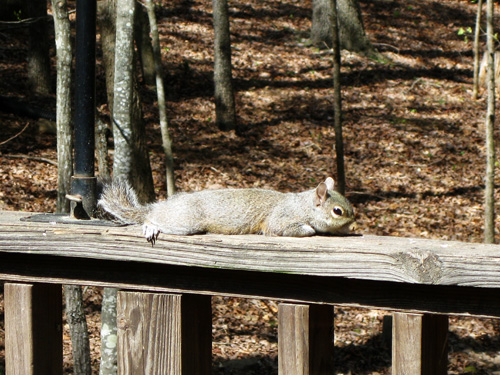 Over the weekend, when Gary and I were at his parents house, I saw a few squirrels laying out in the sun, which was pretty adorable.  Or maybe it was the same one that came back a few times -haha

Anyway, the first time I saw it laying out in the sun and I went to get my point and shoot, and he left!

The second time I saw him, I was able to snap this shot, but it wasnt as cute as the first one, because the first time he was SO sprawled out with his front paws stretched out (True sun bathing luxury) . . .

and speaking of squirrels!

We had Orkin come out today and investigate.  Turns out we had a little squirrel up there that came in through a hole from where a piece of siding had come off, which explains why we didn’t hear it all the time.  Evidently he had made a little nest up in our attic (awww!)  and they saw his little head poke out of the hole and then he left.  So we have a temporary mesh wire piece covering the hole, and this weekend we will get a piece of wood and I’ll patch the hole for now.